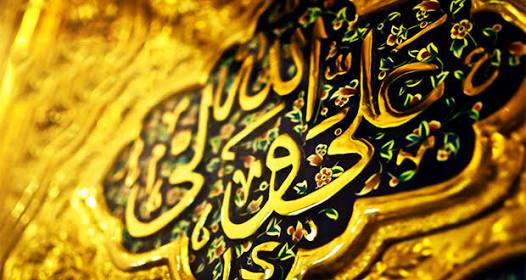 “…and I am leaving with you two weighty things. As long as you hold onto them both, you will never go astray,” said Muhammad, the Messenger of God.

Someone from the crowd then called out, “…O Messenger of God, what are the two weighty things?”

Prophet Muhammad then stated, “The Book of God (the Qur’an) – a connection between God and you – so hold onto it; and the other is my family (Ahl al-Bayt)… Indeed, (God,) the All-Attentive, the All-Aware, has told me that these two will not separate until they reach me at the pond (in heaven)…”

The Messenger of God then took the hand of ‘Ali, raised it for everyone to see, and declared three times, “…So for whomever I am the Leader, ‘Ali is the Leader.”

Prophet Muhammad continued to pray, “O God…love those who love him, detest those who detest him…and turn the Truth with him, whichever way he turns.”[i]

These were the words of Prophet Muhammad on the day of Ghadir. Following the announcement, people proceeded to congratulate their Divinely-appointed leader. Imam ‘Ali was the disciple who emanated wisdom, faith, and valor from every corner of his being. In the sphere of intellectual thought, Imam ‘Ali was an eye of piercing insight. As Commander of the Faithful, he was closest in resemblance to Prophet Muhammad. In the path of justice, Imam ‘Ali’s bravery was legendary. This was the personality of the Commander of the Faithful.

Imam ‘Ali was raised by the Prophet himself and was truly the Prophet’s shadow for most of his life. Even when the Prophet went out to the desert or nearby mountains, the young Imam was his companion. Imam ‘Ali recalled some of these moments later on in his life, when he said, “…Every year he (the Prophet) used to go in seclusion to the Cave of Hira’, where I saw him but no one else did.”[ii]

After the Prophet received revelation in the Cave of Hira’, the first man to outwardly accept the Prophet’s message was Imam ‘Ali. Indeed, Imam ‘Ali was among the very few who never believed in or bowed down to false idols – neither before nor after the advent of Islam. Prophet Muhammad once said to his companions, “The first among you to meet me at the pond (in heaven) is the first among you to embrace Islam – that is ‘Ali…”[iii]

Upon the Muslim migration (hijrah) to Madinah, the Prophet paired each one of the Muslim migrants (muhajirin) with a Muslim brother from the people of Madinah (anṣar). Once everyone had been paired, Imam ‘Ali came up to the Prophet with teary eyes saying, “You have not paired me with a brother…”

Prophet Muhammad then replied, “You are my brother, in this world and the Hereafter.”[iv]

Glimpses of the Legend

The virtues of Imam ‘Ali are too numerous to be encompassed by this short page. But mentioning some of the eternal images in Imam ‘Ali’s life may provide a glimpse into the life of a true legend.

The Battle of the Trench (Khandaq) was a notable scene for displaying Imam ‘Ali’s valor. The hero of the enemies – Amro – had been taunting the Muslims, calling out for a challenger. Many Muslims were terrified of the infamous Amro. But not Imam ‘Ali. Each time the vicious Amro would call out for a challenger, Imam ‘Ali would ask the Prophet for permission to fight. Upon the third request, Prophet Muhammad told Imam ‘Ali, “He is Amro…”

Prophet Muhammad then granted Imam ‘Ali permission to fight. After some words with Amro, it became clear that a fight was inevitable. The two fought until Imam ‘Ali was struck and injured on the head. However, Imam ‘Ali was able to strike back and gain victory.

The Muslims were relieved that the invaders had just lost their wicked icon. Prophet Muhammad commented on the incident by saying,

“The challenge that ‘Ali met Amro with on the Day of the Trench (Khandaq) is greater than the deeds of my entire nation until the Day of Judgment.”[v]

While Imam ‘Ali was a courageous defender of truth on the battlefield, he was also a profoundly wise and patient leader. Imam ‘Ali carefully picked his battles without ever sacrificing his principles. After Prophet Muhammad passed away, many of the prominent companions disobeyed God’s directives to follow Imam ‘Ali as their leader. Instead, different political leaders were chosen by some of the companions. In order to safeguard the Muslim nation from civil strife and self-destruction, Imam ‘Ali opted not to bear arms against the illegitimate rulers. Imam ‘Ali continued to advise these rulers, insofar as the greater benefit of serving the truth was concerned.[vi]

Unfortunately, even when the majority of Muslims pledged allegiance to Imam ‘Ali years later, dissident groups forced Imam ‘Ali into battle, and internal conspiracies prevented him from executing all of his reformatory plans. Eventually, an assassin struck Imam ‘Ali with a poison-laden sword, while he was in prayer at the Mosque of Kufah. In the coming nights, many of the poor stopped receiving the charity they had awaited so anxiously. They realized that the mysterious angel who came to give them sadaqah at night had been none other than Imam ‘Ali.[vii][viii]

The Path of Eloquence

“…He is Powerful, such that when imagination shoots its arrows to comprehend the extremity of His power, and mind, making itself free of the dangers of evil thoughts, tries to find Him in the depth of His realm, and hearts long to grasp the realities of His attributes and openings of intelligence penetrate beyond description in order to secure knowledge about His Being, crossing the dark pitfalls of the unknown and concentrating towards Him, He would turn them back. They would return defeated, admitting that the reality of His knowledge cannot be comprehended by such random efforts, nor can an iota of the sublimity of His Honor enter the understanding of thinkers…”[ix]

Another excerpt of Imam ‘Ali’s words teaches us a lifelong lesson on how to deal with others, especially if we find ourselves in a position of authority. In a letter to Malik al-Ashtar, the Governor of Egypt –– Imam ‘Ali wrote the following:

“…Remember, Malik, that amongst your subjects there are two kinds of people: those who have the same religion as you have – they are brothers to you, and those who have religions other than yours – they are human beings like you. Men of either category suffer from the same weaknesses and disabilities that human beings are inclined to, they commit sins, indulge in vices either intentionally or foolishly and unintentionally, without realizing the enormity of their deeds. Let your mercy and compassion come to their rescue and help in the same way and to the same extent that you expect God to show mercy and forgiveness to you…”[x]