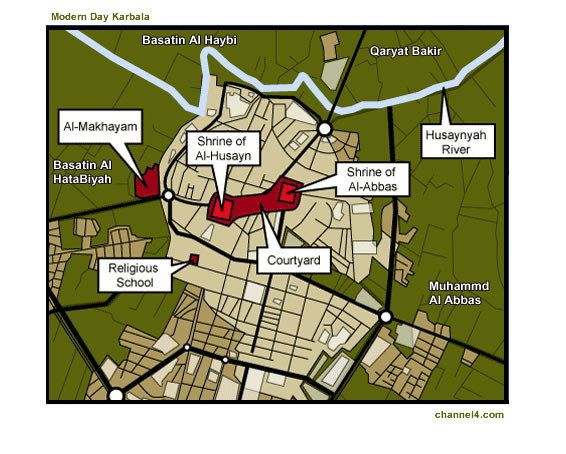 The captives were taken to Kufa where Zaynab, Husayn’s sister is defiant in the face of ibn Ziyad, one of battlefield commanders. They are forced to travel to Damascus where Yazid gloats over the head of Husayn and insults Ali and Zaynab, the only family who survived the massacre at Karbala. They are later released and allowed to return to Medina after Yazid begins to fear the backlash as news of the massacre spreads.

Karbala was a watershed for Yazid. The bloodbath at Karbala, the imprisonment of the women and children of the Household of the Prophet, their parading in chains from town to town, and the speeches made by Zaynab, Husayn’s sister, all contributed to the end of Yazid’s rule and the overthrow of the dynasty Muawiyah founded.

Whilst it would seem that the birth of Shi’a can be linked to the assertion that only ‘Ali could succeed Mohammad as Caliph, the tragedy of Karbala revitalised the official Shi’a movement. The tragedy played an enormous role in the galvanising of Shi’a identity. The fate of Husayn was destined to become the most important agent in the propagation and comparatively rapid spread of Shi’a Islam.

In giving his life, Husayn ensured the survival of his faith.

The holy city of Karbala, situated 100 km south of Baghdad, derives its name from the ancient Babylonian meaning “sacred place of God” from the two shrines it houses of the Prophet Mohammad’s grandson Husayn and his brother ‘Abbas.

The brothers and 72 of their followers were massacred here by troops loyal to Caliph Yazid some 1300 years ago. This event had far-reaching effects for Islam, led to the downfall of the Umayyad dynasty and consolidated the Shi’a identity. Commemoration of this event at Karbala is one the most important events in the Shi’a calendar.

For Shi’a Muslims Karbala is second only to Mecca and possibly Najaf as a sacred site and millions of the faithful throughout history have flocked to the shrines of Husayn and ‘Abbas especially during the month of Muharram to commemorate the martyrdom of their “Master of Martyrs”.

But Karbala has a long history as a sacred city. On the edge of the Syrian desert, this trading town has a rich history going back to Babylonian times when it was used as a Christian graveyard.

Construction of the present city of Karbala began on 12th Muharram 61AH/680CE when the people from the local Bani Asad tribe buried the bodies of Husayn and his companions on the spot where the massacre had occurred.

Over the years, the burial place became known as a shrine and Muslim rulers constructed a dome, galleries, gardens and a mosque around the tomb. Defensive walls followed to protect the city.

The tombs of Husayn and his doomed supporters with their lofty minarets became a symbol of grace and hope for the destitute. They also transformed Karbala into a thriving oasis town and a focus of Shi’a scholarship in Iraq.

Not everyone shared the Shi’a reverence for the final resting place of Husayn and his followers which have been subjected to numerous acts of vandalism.

The original shrine was destroyed by the ‘Abbasid Caliph Mutawakkil in 235AH/850CE and the site ploughed over. After the death of this Caliph, a shrine of some sort was again erected but the bulk of the present shrine probably dates from the time of ‘Adudu’d-Dawla, the Buyid prince, 369AH/979CE. The building was subjected to further violations including the dome burning down in the 11th century.

The most serious damage to the shrine was inflicted by the Wahhabis in 1801 and the Ottoman army under Najib Pasha in 1843 when Karbala was sacked and the tombs of Husayn and ‘Abbas stripped of all their gold and precious ornaments. This was quickly restored by contributions from Persians and other Shi’a Muslims.

The last important restoration of the shrine occurred at the behest of Nasiru ‘d-Din Shah in the 1850s when the dome was gilded and other important structural work carried out. The enclosed area around the shrine is called the Ha’ir and is strictly off limits to non-believers.

In addition to the Shrine of Husayn lies the equally imposing Shrine of ‘Abbas, the half brother of Husayn, where he and the other members of the family of ‘Ali are said to have been buried.