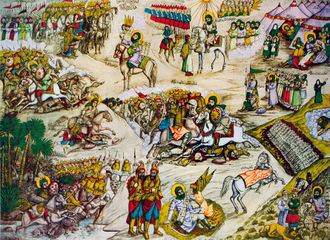 This is a day by day account of Husayn’s time in Karbala leading up to the massacre on Ashura.

Day 2
Husayn speaks to his followers at the camp and assures them of their goodness and truth. In return, they pledge their loyalty to him. Then, foreseeing his death, Husayn purchases about four square miles of land to be the site for his and his family’s graves from the local residents of the area. Day 3
Four thousand additional troops under the command of Umar ibn Sa’d arrive with instructions from Ubaydu’llah ibn Ziyad that they should prevent Husayn from leaving until he signs a pledge to the Caliph, Yazid. Ibn Sa’d’s men prepare for battle and surround Husayn’s party, cutting them off from the river, their only source of water.

Day 4
Husayn begins negotiations with ibn Sa’d stressing he has no desire to initiate bloodshed and asks to be allowed to withdraw to Arabia but ibn Sa’d refuses to relent. Meanwhile the situation in Husayn’s camp is becoming more and more desperate due to the lack of water and fresh supplies.

Day 5
The size of the army facing Husayn’s small band of followers swells as even more troops arrive to join their brothers in arms on the banks of the Euphrates River.

Day 6
The lack of water leads to desperate measures. Husayn uses a tent pole to dig a well, but their relief is short-lived as it dries up. Ibn Ziyad sensing their anguish, sends 500 troops to reinforce the cordon around the Euphrates.

Day 7
Fearing for the health of the women and children, Husayn asks his brother ‘Abbas to conduct a midnight raid past the Caliphate troops to bring back water from the river. Despite a brief skirmish ‘Abbas brings back some precious water to camp earning himself the title, ‘Saqqa’, or water bearer. The water is a godsend but does little to assuage the thirst of the entire camp.

Day 8
In desperation Husayn sends a message to Sa’d requesting they meet, he questions Sa’d’s allegiance to Yazid by asking, “Don’t you fear God on the Day of Judgement? You know who I am”. Sa’d’s loyalty is unshaken; he considers trying to act as a peacemaker between Husayn and Yazid but is dissuaded when his supporters urge him not to compromise.

Day 9
After a long, hot day in the desert filled with the cries of children for water, Husayn’s camp prepares for the attack they know is coming and are powerless to stop. Husayn gathers his companions together and pleads with them; “Whoever remains with me will be killed tomorrow; so consider this opportunity as Allah sent and take advantage of the darkness and go home to your villages.” He then extinguishes all the lights in the camp to allow those who want to leave to do so. His followers weep and reply, “Oh master do not thus shame us before Allah..were we to desert you, may the wild beasts of the jungle tear us to pieces.”

Husayn sends one last message to Sa’d asking to be spared one last night so that they may pray to Allah and recite the Qur’an. Sa’d reluctantly agrees and the Imam gathers his followers together for one last sermon. Again, his followers protest their loyalty and vow to die alongside their master.

Such was the power of their faith that when the enemy saw them praying 32 soldiers switched sides and joined them including Hurr, the commander of the original army that had routed Husayn from Kufa. He became one of the first martyrs to fall.

Day 10 ‘Ashura’
Friday 10th Muharram, 61 AH (10th October AD680) On what was to be his last day Husayn and some of his followers implore the ibn Sa’d troops for the final time not to shed the blood of the Prophet’s house. Leading by example, ibn Sa’d is the first to shoot an arrow into the pitifully small camp. Despite their lack of numbers, Husayn’s followers fight ferociously refusing to give up.

By mid-afternoon Husayn and his relatives face the marauding army, their defence spent. One by one they fall including Husayn’s sons aged just 11 and 13. Husayn continues to appeal to the enemy’s humanity; he takes his six-month-old baby son and pleads for water. The enemy respond by shooting poisoned arrows which pierce the neck of the baby killing it instantly.

Finally Husayn is the last left standing finally falling on the battlefield next to his dead comrades. Covered in wounds, Husayn is then decapitated and his body is mutilated in order to send souvenirs back to Yazid. His followers suffer a similar fate. Their bodies are trampled by enemy horses and left where they fell denying them a Muslim burial.

Yazid’s soldiers then loot and plunder the remains of the camp taking the women and children prisoner including ‘Ali, the only surviving son of Husayn.