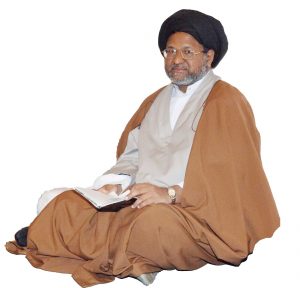 Hujjatul Islam Syed Rehan Naqvi is the resident ‘Alim (scholar) at Shah-E-Najaf Islamic Center. Maulana is originally from Karachi, Pakistan. He graduated from Islamia College (Karachi) with a degree in commerce. Soon after graduating, he to moved to Qom, Iran where he began his Islamic studies at the Islamic Seminary (Howza Ilmiya). In 1993, he received his Masters in Shi’a Theology from the seminary. In parallel he also received a Masters from Jamaia Muntazar (Lahore, Pakistan). While studying in Qom he attended Dars e Kharij and completed two levels of Kharij in approximately four years, he studied under Ayatullah Uzma Wahaid Khorasani.

Maulana Rehan later moved to a Shi’a community in Botswana, Africa and did tabligh. From 1999 to 2004 he was the resident Alim in Botswana. Some of his achievements included converted several locals to the Islamic faith. After he had completing his five year contract in Botswana he moved to the US and become the resident Alim of Shah-E-Najaf Islamic Center of Suffolk County.

The community is very grateful for the dedication and the active role Maulana Rehan has taken why working with the Long Island community.