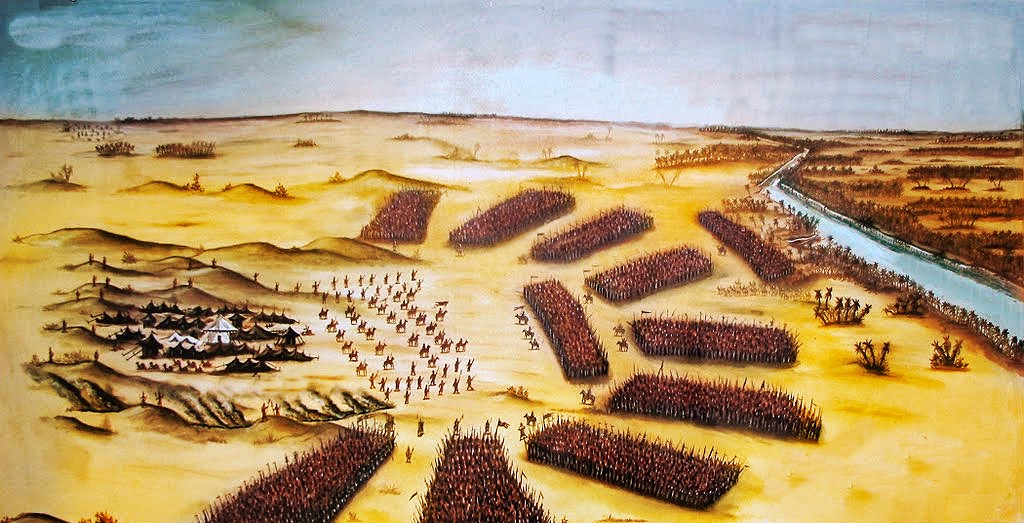 Find out more about the key people mentioned in the historical events surrounding the Ashura massacre in Karbala.
(NB: Hijri dates are given beforehand followed by Gregorian dates, thus 132AH/750CE)

Ali (Abu’l – Hasan ‘Ali ibn Abi Talib)
Though not directly involved at Karbala, ‘Ali is a vitally important character in Islamic history. The fourth Caliph and the first Shi’a Imam his place in Shi’a history is guaranteed. The cousin of the Prophet and husband of Fatima, Ali inspired the name Shi’a ( Shi’a at Ali – the party of ‘Ali). It was the usurpation of Ali’s rights preventing him from succeeding the Prophet Mohammad as leader of the Islamic community which is looked upon by Shi’a as the event that sparked their movement. Shi’a historians emphasise the strong bond that existed between the Prophet and ‘Ali. It was ‘Ali’s father who looked after the Prophet after his parents died and thus Mohammad became very close to his young cousin. Aside from Khadija, the Prophet’s wife, ‘Ali was the first person to acknowledge the Prophet’s mission and convert to Islam. In the eyes of both Shi’a and Sunni Muslims ‘Ali has acquired an almost legendary reputation as a paragon of virtue and a veritable fount of knowledge.

Hasan – Imam Hasan ibn Ali
Known as the chosen (al – Mujtaba) Hasan is considered by Shi’a to have become the religious leader (Imam) following the death of ‘Ali. Hasan was born in the year 3AH/625CE in Medina and was raised with his younger brother Husayn in the Prophet’s household. Mohammad said of his beloved grandchildren, “he who has loved Hasan and Husayn has loved me and he who has hated them has hated me”. Hasan was declared Caliph after the assassination of his father but relinquished the Caliphate to his political rival Mu’awiya to prevent a rift in Islamic society. Some have criticised Hasan for relinquishing control but Shi’a historians claim his abdication was realistic, compassionate and avoided bloodshed. Hasan, after his abdication in 41AH/661CE retired to Medina and led a quiet life away from the spotlight. Hasan died in 50AH/670CE aged 47, Shi’a say he was poisoned by his wife at the instigation of Mu’awiya but it can’t be proved.

Husayn – Imam Husayn ibn Ali
The ‘Master of Martyrs’ (Sayyid ash – Shuhada) as many Shi’a call him was born on the ‘3rd of Sha’ban’ in the fourth year of the Hijra (626CE). His grandfather, the Prophet Mohammad named him Husayn, meaning one of beautiful character. Husayn was brought up with his older brother Hasan in the household of the Prophet who referred to the two children as the “chiefs of the youths of paradise”. When his brother Hasan died, Husayn became head of the household but did not act against the ruling Caliph at the time, Mu’awiya. Upon Mu’awiya’s death the Caliphate was controversially passed to his son Yazid. Husayn could not accept Yazid’s rule which led to his murder by Yazid’s forces on the 10 Muharram AH61/680CE, a day known as Ashura. His body lies in a holy shrine in Karbala and has become a pilgrimage site for millions of Shi’a.

Mu’awiya
He became Caliph at the age of 59 after ‘Ali’s assassination in 661CE. He engineered an agreement with Hasan to relinquish the Caliphate in return for promising peace and not requiring the members of the House of the Prophet to swear allegiance to him. The peace treaty asserted that, “he (Mu’awiya) would harbour no evil or harmful schemes towards Husan..his brother Husayn, or any of the people of the House of the Messenger of God”. Some say part of the agreement was that the Caliphate would revert to Hasan on Mu’awiya’s death. Instead, prior to Mu’awiya’s death in 60AH/680CE, he arranged for his son, Yazid, to succeed him as part of the Umayyad dynasty which ruled until 132AH/750CE.

Yazid
Son of Mu’awiya, Yazid was born in 21AH/642CE and inherited the Caliphate from his father. He ruled for just three years amidst reports of bribery and threats. Most historians view Yazid as a drunkard who openly flouted the laws of Islam. Despite his father’s wishes to respect the agreement that he had made with Imam Hasan, Yazid required the Prophet’s grandsons to swear allegiance to him to ensure his credibility. Husayn refused to swear allegiance to Yazid which resulted in the massacre at Karbala on Ashura.

‘Ubaydu ‘llah ibn Ziyad
Ziyad was the governor of Basrah who was appointed by Yazid to take control of Kufa. Under his tough leadership, Ziyad successfully intimidated the Kufans, who had declared their support for Husayn, into not joining him. It was his orders, relayed to the armies at Karbala that resulted in the Ashura massacre.

Zaynab (Zainab)
The sister of the Imam, Zaynab was taken prisoner after the massacre at Karbala by ibn Ziyad on behalf of Yazid. She reportedly conducted herself with dignity and courage. When there was the possibility of ibn Ziyad killing her nephew, ‘Ali, the only surviving son of Husayn, she threw her arms around ‘Ali’s neck exclaiming, “by God, I will not be parted from him and so if you are going to kill him, then kill me with him”. Ibn Ziyad imprisoned the captives and did not kill ‘Ali but sent them to Yazid with the head of Husayn. Although ibn Yazid mocked ‘Ali and Zaynab he eventually allowed them to return to Medina.

Al-Hurr at Tamimi
He was the young commander of a 1000-strong military detachment who intercepted Husayn’s party as it approached Kufa. But on the morning of Ahsura, Hurr was one of the 32 troops once loyal to Yazid who switched sides when faced with the emotive words of Husayn and the enormity of act of violence he was about to commit. He was one of the first martyr to fall fighting to protect Husayn. His shrine now lies in Karbala, Iraq.

Muslim ibn Aqeel
He was Husayn’s cousin who was sent ahead as an envoy to Kufa to see if the people could be trusted to be loyal. He sent word back saying that the Kufans were loyal but was murdered by the governor Ziyad who was loyal to ibn Yazid.

Al – Abbas
‘Abbas was the half-brother of Husayn who was given the title of water bearer (Saqqa) and was killed at Karbala when he was ambushed whilst trying to get badly needed water to his brother and his followers. His shrine, as with Husayn’s, is in Karbala.